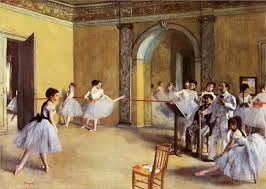 Once upon a time, there was a girl named Jane. She was one of the most beautiful girls, she had long red hair and big green eyes. Jane was an orphan girl, so she had to work a lot, during the day she did workhouse and at night she worked in a bar.

In her spare time, she danced ballet, as her dream was one day play the role of Giselle in a recital. Until one day everything changed... She was dancing ballet, like the other days and decided to do a pirouette with heels and when she did the jump she magically flew to another place. When she looked around she saw a long marble staircase and columns in worked limestone, she immediatlly realized where she was. She was in the prestigious and exquisite opera of Milan. After this she pinched her armand then realized that she was not dreaming. So she decided to climb the stairs towards the great auditorium. When she gothalfway up the stairs she started to hear her name being called and then she decided to follow the sound.

When she arrived she saw lots of ballerinas around a bearbed gentleman in an exquisite costume. Then she came to him, already tired of calling her name and said "its me". After that, she joined the others and the gentleman began to explain why they were there. He explained that were there to the auditium for the role of "Giselle" in the "sawn lake" recital. After that he said, that day they would do 2 tests (that day) and the final test would be done the next day.

The he explained that in the first test the would have to dance a piece of their choice without the ballet shoes. Jane was overjoyed, before her bought her shoes she danced without them. The test was almost over and she was super nervous. Suddenly her name was called, and then she took a deap breath and danced like no one was watching. In the end, she was overjoyed to see that she had passed, however looking around she noticed half people were no longer there.

After that, the rest followed the gentleman out of the enclosure. He led them towards a giant pudle of water, and there he explained that they were going to have jump into the pudle and that they could not splash. This time, Jane was going to be the first and let the fate dicide, when she was "started", she jumped and surprisingly didn`t splash. At the end of the test, only her and another girl left. After that they were escorted to the dormitories. Jane got to her room, lay down n her bed, and fell into sleep.

When she woke up she looked at her watch and realized she was late. She quickly dressed up an ran to the auditorium. When she arrived, the gentleman and her "partner" were sittig wainting for her. She apologized and soon began the test. He asked them to go on the stage and asked them "why do you dance ballet?".The other girl anticipated and said "because my parents want it". After her, Jane said that she danced because it was her dream, because it was in her blood and heart and that it was the reason she woke up every day. After that, gentleman without thinking twice said that the winner was Jane. And the other girl objected and said that it was unfair, because she was the best. The gentleman said that could even be the best in technique, but that Jane danced with passion, something she didn`t have because she danced for her parents and not for love.

After that, the girl ran out of the auditorium. The gentleman congraluated Jane and said she was going to work hard. A month passed, full of effort and finally the had arrived.

Jane got up early because of so much excitement. She got dressed and then went to the auditorium to get ready. Now the long awaited time had come. Jane walked up the stage and it was as if she was dreaming. The show was going great and when she took the last jump she magically returned to her normal life. But this time she was happy and fullied and ready for a new dream.